Hello, and welcome to the world of ArtificialScarcity.com, purveyors of some of the finest scarcity available online. Or, as we are known to our customers, "ArtificialScty" as on your credit card slip, due to an artificial scarcity of characters by credit card processors in the internet age. That silly shortened name on your credit card bill is an example of how we build the politics of scarcity into our very infrastructure, after which it can become very difficult to get rid of scarcity unless many people agree to change in some coordinated way. This website was started by Paul D. Fernhout, who is interested in helping the world peacefully transition to abundance for all, including quadrillions of humans is space habitats built using sunlight and asteroid ore. He believes that there is plenty of abundance to go around in this universe, in this solar system, and even just on Spaceship Earth. 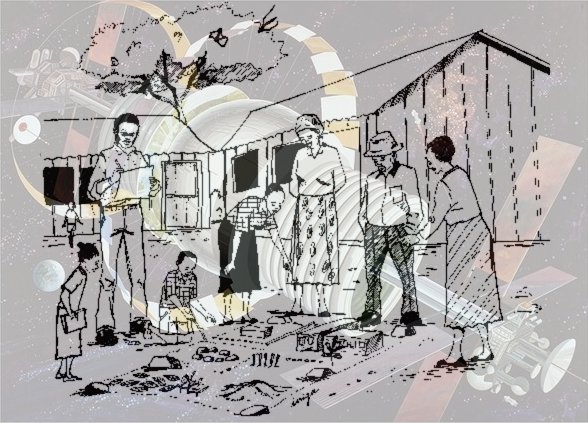 Artwork derived from NASA artwork by Rick Guidice on Space Colonization blended with a modified version of the Land-use plan artwork by Richard Iriga from the Development Art collection using The GIMP under Debian GNU/Linux.
We are slowly learning in the internet age what many wiser people knew centuries ago, that there is enough to go around for everyone on the planet, between organic agriculture, renewable energy, fancy robots, 3D printers, and all kinds of great stuff that tinkerers, engineers, and scientists, inspired by people like the historical Benjamin Franklin, are busy inventing and researching. And because so many people have been industrious like Mr. Franklin for so long, you would think we would be able to relax a little these days, a couple centuries later after good old Ben. But, apparently not. Basically, scarcity relative to true human needs has long been over, but nobody got the memo. Now, in any reasonable post-scarcity society, likely one that many banksters would call "socialist" (except when they themselves are getting to privatize gains but socialize risks and costs), and others might call "Star Trek" if they have not seen Jay Leno talk about 3D printers, everyone would just take what they really needed, and most would volunteer to do what they thought needed doing. Probably there would be a little bit of social negotiation about big things like a space program, and likely there would be lots of robots to help out with the jobs people may not want to do much. Author James P. Hogan writes a lot about these themes, as does Marshall Brain, and many others. Here is a summary of a relate essay I originally sent to Andrea Rossi in regards to his cold fusion eCat demonstration. From the beginning there:

The key point here is that breakthrough clean energy technologies will change the very nature of our economic system. They will shift the balance between four different interwoven economies we have always had (subsistence, gift, planned, and exchange). Inventors who have struggled so hard in a system currently dominated by exchange may have to think about the socioecenomic implications of their invention in causing a permanent economic phase change. A clean energy breakthrough will probably create a different balance of those four economies like toward greater local subsistence and more gift giving (as James P. Hogan talks about in Voyage From Yesteryear). So, to focus on making money in the old socioeconomic paradigm (like by focusing on restrictive patents) may be very ironic, compared to freely sharing a great gift with the world that may change the overall dynamics of our economy to the point where money does not matter very much anymore.

There have always been four interwoven economies, and the balance of them is shaped by our society:

[And as has been pointed out to me since, there probably always a fifth economy based around "theft" or "conquest".]

Paid human labor has less and less value due to several causes including due to robotics, AI, and other automation, due to better design, due to the accumulation of physical infrastructure, due to cheaper energy (which can often substitute for human labor), and/or due to the emergence of voluntary social networks.

Mainstream economists try to get around this long term trend by assuming infinite demand, but that is just not in accord with human psychology or social dynamics. See Maslow's Hierarchy of Needs, or an emerging "Reduce, Reuse, Recycle" ethic, or see any of the world's major religions — including humanism — about moving beyond materialistic values.

So, we can expect the balance between those four economies to change as our technology and society changes, perhaps with:

"The release of atom power has changed everything except our way of thinking... the solution to this problem lies in the heart of mankind. If only I had known, I should have become a watchmaker."

And we're stuck in the middle of that craziness and irony, even having put much of all our past time and money into creating free software and free content for over a decade. So, here we are, creating an artificial scarcity of some of our software for a time rather than giving it away freely. And, frankly, we're sad about this. Yeah, grants might help, but they generally go to people who are more part of the mainstream than we are. It's sad after so many years to end up making more artificial scarcity with some software applications just to get some money. Sorry. Just because money is a collective fantasy does not mean it is not really shaping people's behavior. Basically, we're trading a little bit of our imaginary thought stuff (bits in a computer representing software) for a little bit of your imaginary thought stuff (bits in a computer representing money), using old-fashioned shopkeeper economics. It's a lot of trouble to be a shopkeeper, and it requires police and so on to deal with theft inspired by scarcity, and it keeps a lot of people from having things that take practically nothing to duplicate once they are designed. It's a terrible way to run a 21st century economy, in our opinion. We'd prefer to have some sort of better economic model instead of one-for-one trading someday, for all sorts of reasons. As the Triple Revolution memorandum explained in 1964:

"The industrial system was designed to produce an ever-increasing quantity of goods as efficiently as possible, and it was assumed that the distribution of the power to purchase these goods would occur almost automatically. The continuance of the income-through-jobs link as the only major mechanism for distributing effective demand -- for granting the right to consume -- now acts as the main brake on the almost unlimited capacity of a cybernated productive system."

At least we are creating some artificial scarcity in relation to tools that help bring abundance to all, like an abundance of self-generated music or an abundance of education. It is our plan to put each version of these tools under free and open source licenses like the GPL three years after they are released, making this artificial scarcity at least time-limited, making it "temporary artificial scarcity". Copyright might not be quite such a bad thing if it were only three years or so in the internet age. So, in that sense, at least you are funding future abundance for everyone when you support our work. It's a disappointment for us in a lot of ways, but at least it is a step forward. So, please forgive us for not finding a better way right now and making this compromise. We tried for years to do things differently. Hopefully, we'll keep trying to bring about global abundance in other ways not connected with this website. We hope you keep trying to create abundance for all in your own way (or start trying if you haven't), too. Ideally, someday our global society will supply a basic income for all, will do resource-based economic planning, will have stronger local subsistence communities, and will have a gift economy that spreads from the digital world to the physical world. We look forward to that day. For more on solutions to artificial scarcity, please see the Jobless Recovery Wikipedia article. Even millionaires and millionaire wannabes might be happier overall with widespread abundance through things like a basic income. As a public service announcement, please make sure you are getting the right amount of vitamin D. As we all spend more time indoors at screens, as we drive more instead of walk or bicycle, as we wear more sunscreen and lots of long sleeved clothes and hats as recommended by well intentioned dermatologists, and as we use newer window glass that blocks UV-B that can fade carpets, most people in industrialized countries have become vitamin D deficient. So, rather than faded carpets, we get faded people instead, fading fast from cancer, heart disease, depression, schizophrenia, autism, influenza, and even tooth decay, which have all been linked in part to inadequate vitamin D. The US RDA for vitamin D (as of 2009) was set decades ago for healthy bones, not a healthy brain, a healthy immune system, or a healthy heart. If everyone in the world got the right amount of vitamin D, this might save around a trillion dollars a year globally, which would be more than enough to pay for a lot of software developers to make a lot of free software. If you add to that the dietary advice to eat more whole foods that are nutritionally dense (like vegetables, fruits, legumes, nuts, and seeds), such as recommended by Dr. Joel Fuhrman in "Eat to Live", then we would have even more surplus and healthy human energy available to ensure abundance for all. Oh, right, almost forgot. About our artificially scarce products? Please see the individual web pages linked below.

Our latest product is the EvoJazz Musical Toy for Android, a program that helps amplify your natural musical creativity to create an abundance of music.

An earlier product is Musical Phrases for the Android but people didn't like it much. It tried to do more than EvoJazz, like support editing musical phrases note-by-note and composing phrases into bigger works, but did not do it as well as people wanted or look enough like what they were used to in music composition software. So, we slimmed it down into EvoJazz which is what it had started out as, anyway.

Thank you for reading this, and for visiting our site, and maybe even for giving us money that gives us time to improve our products and content. We appreciate your support that allows us to continue various efforts to eventually help bring abundance to all.